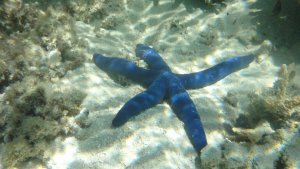 cently as if I am pointing to the boatman who left me here without my own will. I somehow covered 70% of the distance towards the island. Now during rest 30% I was bloody tired and felt like crying. I covered the last 25% distance and I was overwhelmed by the swimming. The water was only knee deep now and I realized that I can rather walk now. But my will power had given up so I kept swimming till my face was rubbing against the sand and there was not enough water to swim. I somehow managed to stand up and walked towards the shore. I didn’t want to see that boatman just now due to my anger for what he did so I walked towards an isolated place on the beach and sat there for a while. I didn’t even realized when I lay down there and slept till a little girl woke me up by asking to buy a bangle. I then realized that it was the best sleep I had in ages. I felt that a surge of relief flooded me after that thinking that I am still alive and I have witnessed the most beautiful place on earth (as this was the first time I had done reef jumping). I had no anger left in me but sheer joy.